One of the unique and powerful features of Signal Chain Explorer is the ability to quickly see the input and output impedances of a stage, both “locally” (stage by itself) and “globally” (backwards or forwards to the beginning or end of the signal chain.) The former we call “local impedance.” The latter, global impedance. We showcased global impedance in an earlier article LC Baluns in Action. If you haven’t read that article, you should check it out. You’ll get to see how valuable it is to be able to easily and graphically verify that the LC Baluns are doing the impedance matching they were designed to do.

Now, in this Short and Sweet article we take a look at input and output impedance as they pertain to op-amp stages. If you’ve never had the opportunity see these amp stage impedances visually, you might be surprised by the results.

Before we get started, we want to point out where the buttons are that allow you to see the various types of impedance. They are located just above the signal chain panel:

We’ll start by adding a closed-loop voltage gain follower stage to a signal chain, and then look at its local input and output impedances. The stage circuit is as follows:

NOTE: If you don’t want surprises in your signal chains, knowing the output resistance is a very valuable piece of information to have, but finding its value can be tricky, as datasheets for op-amps may not specify it directly, but may infer it with graphs, and/or specify instead the closed loop output impedance (which we will be illustrating in this article) at one or more frequencies. In an article to come, we’ll show how you can determine the open loop output resistance both from datasheets, and by testing on the bench.

Here’s how the UA 741 gain follower is set up in SCE. Note the open loop gain of 106 dB, and closed loop gain of around 21 dB set by the external resistors. This op-amp has a unity gain bandwidth of 1 MHz, and an open loop corner frequency of 5 Hz: 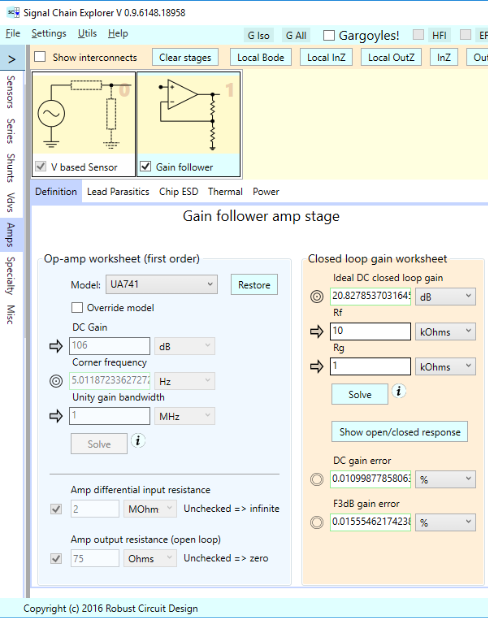 When it comes to impedance, you might think that the 2 MOhms input resistance is all you need to know when interfacing to the inputs of this op-amp. But that is decidedly not the case! You may not realize that the input resistance of a closed-loop op-amp stage varies significantly with frequency, as shown in the plot below, which was produced by clicking on the Local InZ button with the gain follower stage selected as the stage of interest. The green curve, the magnitude of the impedance, is mainly what we are focusing on: 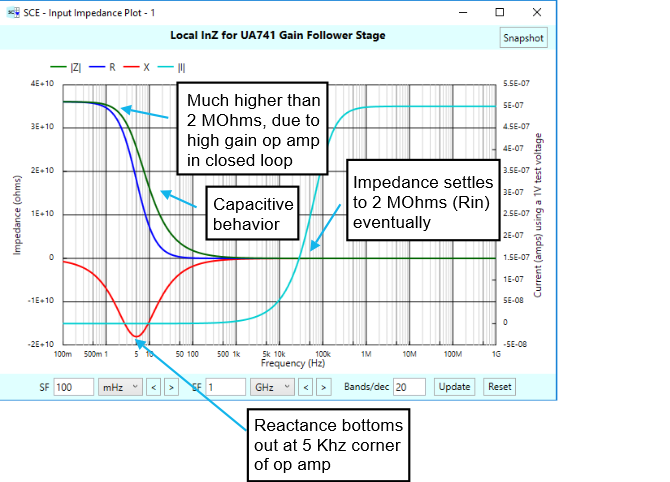 You can easily see that as D goes to infinity, so does this term.

However, as the frequency increases, another term is subtracted from the DC impedance term, where s is the Laplace frequency variable and U is the unity gain frequency:

This subtracted term causes the capacitive-like roll off of the impedance (realize that the impedance plots are linear in Y), until the impedance settles on the 2 MOhm input resistance, which occurs out past where the op-amp can no longer deliver gain (ie., past the unity gain frequency). The following zoomed in plot shows this:

We aren’t usually privy to such detailed equations as shown earlier when thinking about op-amp behavior, but that’s okay, SCE’s impedance plots show us what will happen anyway, and these graphical plots are very informative. We note with interest from the original InZ plot that the reactance bottoms out right at the op-amp’s corner frequency of 5 Hz. We don’t know what that implies.

The following plot shows the local output impedance of our gain follower stage: 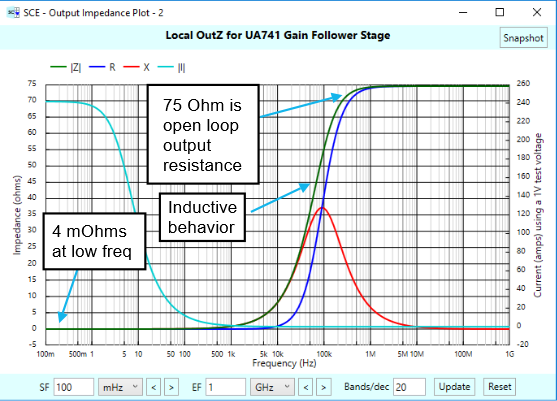 As was the case with input impedance, the output impedance of a closed loop gain follower varies by frequency, due to the closed-loop behavior of the stage. At low frequencies, our stage has very low output impedance — a desirable quality that makes the device easy to use, with minimal losses. However, at intermediate frequencies, the stage looks more like an inductor, the consequences of which we’ll explore in a bit. At high frequencies, out above unity gain, the stage takes on the open-loop resistance of the op-amp itself.

Because of the inductive behavior of the output impedance of a closed-loop gain follower stage, you must be careful when hanging non-resistive loads on the output. For example, should you have a capacitive load, it will combine with the inductive behavior to create in effect a second-order system, and as you might be aware, such systems can have resonant peaking, and can even oscillate out of control.

For example, let’s put a 10 uF capacitor shunt after the gain follower stage:

Here’s the resulting Bode plot. Notice the classic second order response, and the 25 dB of peaking.

It’s well known that gain follower stages (remember, another name of non-inverter) are good at isolating one side of your signal chain from the other. In this section, we’re going to see this graphically, using the global impedance buttons, as opposed to the local impedance buttons.

Below is a signal chain consisting of a phono cartridge sensor having 1,550 Ohms series resistance and 650 mH of series inductance, (you saw this sensor in use in the posts Simple Digitized Audio Example and Upgrades to the Sensor Stages of Signal Chain Explorer), followed by a parallel RC shunt stage of 47 kOhms and 200 pF. Following this is a gain follower stage. 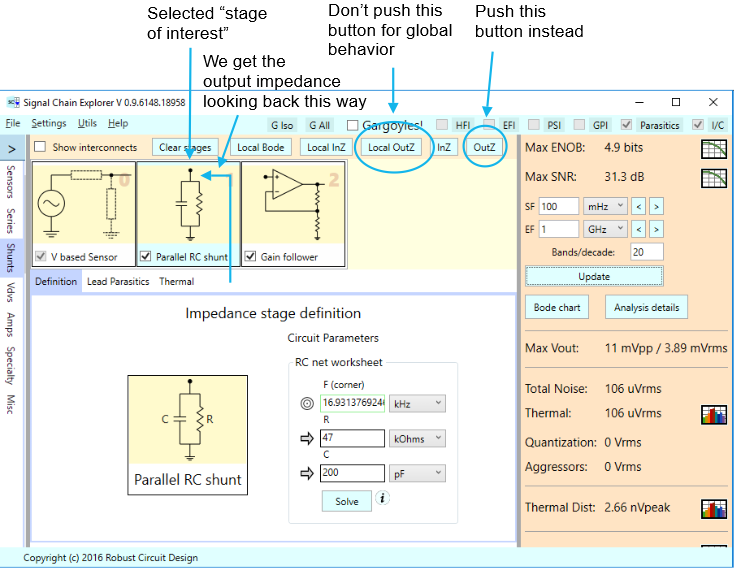 Here’s what we get for output impedance:

There are some interesting things going on around 11 kHz. Let’s see what happens if we use our gain following to isolate the rest of the signal chain from this. To do so, select the gain follower stage as the “stage of interest” and press the global OutZ button: 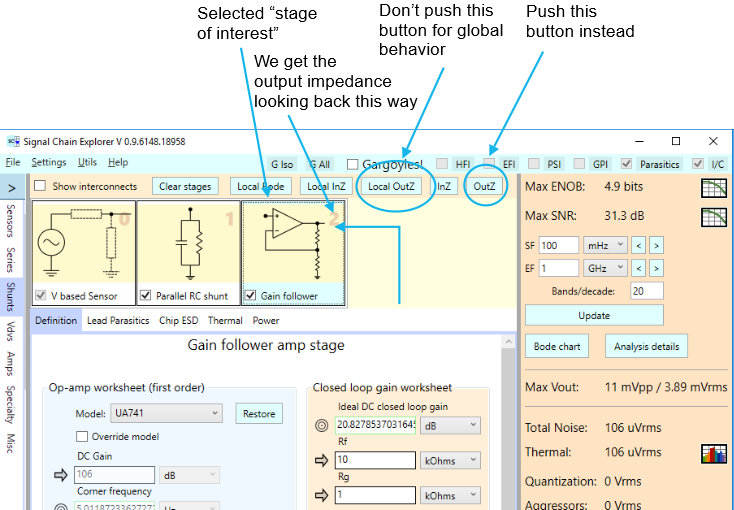 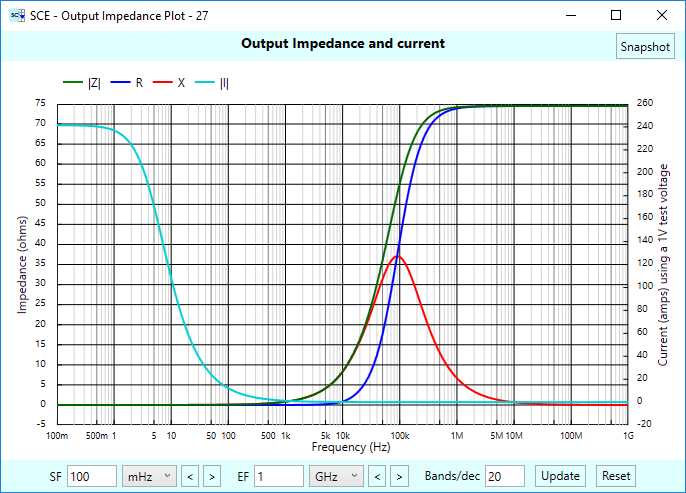 It’s the same plot we saw earlier for the “local” input impedance of the amplifier stage. So the gain follower does a good job of isolating any stages to the right (we have none in our example) from the effects of the phono cartridge and termination shunt stages to the left.

Now it’s time to switch gears and look at the impedances of an inverter stage. We’ll use the same UA741 op-amp as before, and the same feedback resistor of 10 kOhm, and we’ll use a 1 kOhm input resistor: 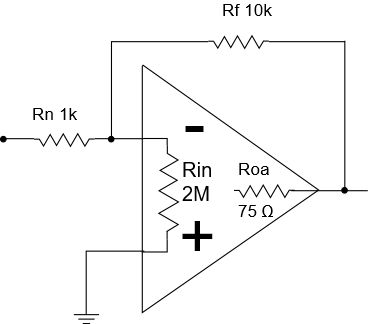 The following figure shows the setup in SCE: 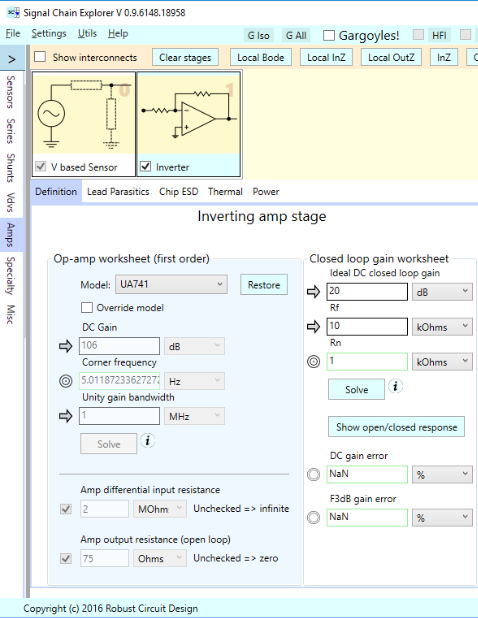 Okay, what do you suppose the input impedance of our inverter stage is? 2 MOhm? 36 GOhm like we got for the gain follower?

How about 1 kOhm — at least at low frequencies. The following plot tells the tale: 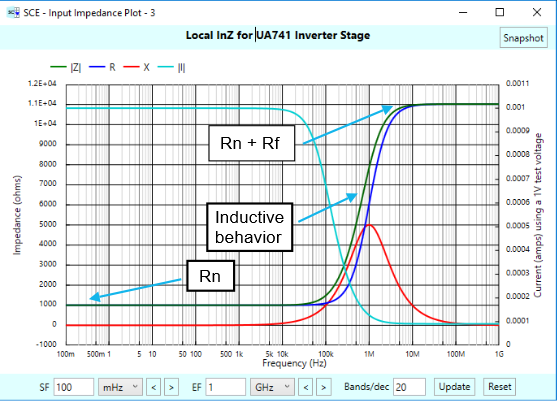 At low frequencies, the input impedance is simply the resistance of our input resistor of 1 kOhm. But then, at intermediate frequencies, the impedance rises with an inductive-like behavior, and then eventually settles to 11 kOhm. Note that 11K = 1 K + 10K = Rn + Rf.

We note with interest the reactance peaks at 1 MHz, the unity gain frequency of our op-amp. We don’t know the implications of that.

Okay, now let’s see what the local output impedance of this puppy looks like: 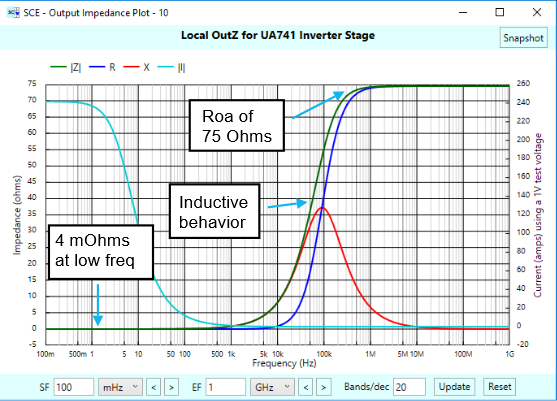 Interestingly enough, it’s identical to the output impedance of our gain follower stage! Hmmm, wonder why that is. (Maybe we’ll investigate this too in another article.)

But what about the isolation characteristics of our inverter? Will it isolate the stages to the right from the stages to the left? Let’s find out. Remember our signal chain earlier, where we had a phono cartridge sensor and then a shunt termination stage before the gain follower? We could build the same circuit, but use an inverter instead, and then look at the overall output impedance. The figure below shows the result: 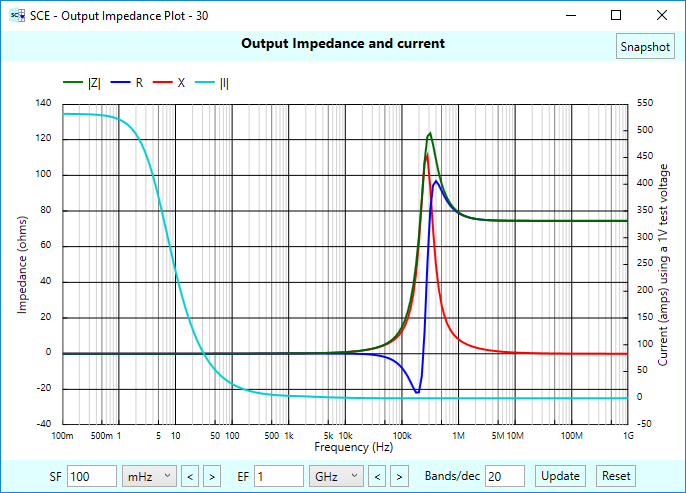 Yikes! We can see the effects of the phono cartridge “bleed through”. How does this occur? There is a direct path from input to output in the inverter stage, passing through Rn and then Rf, but not needing to pass through the op-amp at all. That’s how the stages to the left of the amp stage can affect the stages to the right.

We’re sure there’s plenty more we could investigate right here about op-amp impedances and the like, but we’ll leave that for another day and dollar. Besides, this Short and Sweet article is getting a bit long.

But don’t let that stop you from further exploration using the unique and valuable impedance plots of Signal Chain Explorer! We hope you realize that you can use the local and global impedance plots at any stage of any signal chain, even complicated ones. We think being able to easily visualize the impedance functions will prove to be a powerful tool.

This site uses Akismet to reduce spam. Learn how your comment data is processed.